Acoustic Rooster and His Barnyard Band, by Kwame Alexander, is another picture book that will appeal to kids of all ages.  Once students have learned a little about the Jazz Age and have become familiar with names like Duke Ellington and Ella Fitzgerald, they are ready to appreciate the humor in Acoustic Rooster.

The cartoon-style illustrations of the animals should also appeal to middle grade kids, and there are some great, funny details such as the “I ♥ Jazz” sticker on Acoustic Rooster’s guitar case, and the little ’20s style hats on the hens. 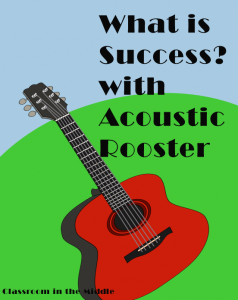 The story is about a rooster who REALLY wants to win the yearly talent show on his farm.  He wanted to be a STAR! To do so, he decides to form his own band.  There are some complications, because this talent show has RULES, but eventually he puts together a band with Duck Ellington, Bee Holiday, and a pig with a name that is too long – so he gives the pig a band name – Pork Chop.

In the end, Mules Davis wins the talent show, and Acoustic Rooster and His Barnyard Band comes in second.  At first, Acoustic Rooster is disappointed, but when Mules Davis pays his a big compliment, “That rooster sure can play,” he realizes that it was OK that his band didn’t win because he still had a great band.  A nice message for kids who might have gotten the impression in the past that winning (or passing the tests) was the most important thing.

Here are a few ideas for follow-up assignments:

•Have kids do a little research to identify the jazz musicians referred to in the story by naming each one correctly and telling what that person is most famous for.  (There’s a list in the back of the book.)

• Discuss other stories that the students have read which incorporate history, and talk about how that history is included in the story (most often it’s the setting, especially the time period of the story).  Have students work as a group to write create a storyboard (a series of frames like a comic strip) or write a short narrative based on a time period or historical event of their choice.

Also in the back of the book is a glossary of jazz vocabulary and a jazz timeline that could easily be used as a basis for more related lessons.

If you are looking for more reading resources, here are a few choices from my Teachers Pay Teachers store,including some task cards, a novel study, and a packet of informational text activities.  There are more choices of each type in the store.  Click on an image to view details about the resource.

Linked with Reading Toward the Stars for Book Talk Thursday:

One response to “What Is Success? with Acoustic Rooster”