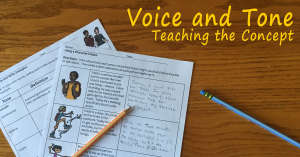 As far as the difference between the two, I think the easiest way to explain it is to point out that authors have a voice, but pieces of writing have a tone. One writer can write in different tones for different purposes.  Character’s also can have a unique tone, and a writer may use a variety of tones in one novel as the different characters speak.

But really, how often is a kid going to have to identify whether something is a voice or a tone.  The important thing is to be able to understand voices and tones in stories and articles that they read. Recognizing these story elements can add another dimension to their understanding of the text.

As with other reading elements, it might help for students to think of voice or tone as used in everyday speech first.  When recalling conversations that they have heard or dialog from a movie, kids may have no trouble identifying the tone as courageous, timid, helpful, or humorous.

By working with just the concept first, the words voice and tone will have real meaning for students and will be much easier to apply to more abstract reading situations.

Two of the activity sheets that I’ve developed for practicing with the concept of voice and tone and shown above.  In one, students are shown pictures of kids their age with a little information about each one that gives clues about what voice or tone they might use.  Then students are asked to write a few lines as that student might have said them.  In the other, specific tones are named and the students are asked to explain each one and give an example.  These are just two of the fifteen activities included in my Voice and Tone teaching resource.

Along with the activities, I’ve included the Voice and Tone slide presentation.  You can see a few samples of the slides below.  Formal and informal voices are discussed in the slides, and there are lists of voice and tone words. The idea of voice and tone in marketing is also introduced to provoke student interest. Questions along the way and a project at the end keep students involved.  There is a fill-in-the-blank notebook page, included at the end of the PowerPoint, that you can print out for the students to complete as they view the slides.

Another item that I find helpful is a handy list of voice and tone words.  I’ve found several ones online with just a quick search.  Or, kids could create their own classroom posters using words from the slide presentation.  A follow-up classroom discussion would surely generate more words that they could add.

Altogether, these activities and resources should give your kids a good foundation on the tricky topic of voice and tone. 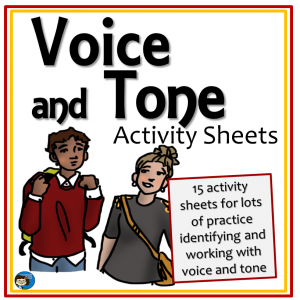 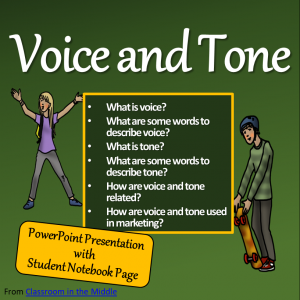 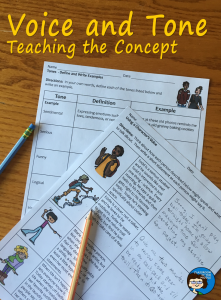