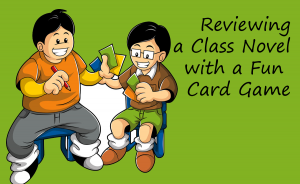 Beginning a new whole-class novel is an exciting event.  Teachers talk up the story, and kids start to make connections to their own experiences right from the beginning.  Then they get to meet the new characters; it’s almost like getting new students in class – always exciting!

As the story progresses, there are so many spots along the way for students to make new connections and for teachers to use as springboards to connect students to new language features.  A single paragraph can be the example that launches a whole lesson on anything from personification to subordinate clauses.

But at the end of the novel, there is usually one more thing to tackle, and for many teachers as well as the kids, it’s not a very engaging one.  That, of course, is an end-of-novel evaluation.  And, since a pop-quiz usually won’t do here, some reviewing is often in order before the test.

One quick, but fun, little review activity – for any novel – is a whole-class game of “I Have . . .Who Has . . ?”  The game is basically a cooperative one, no winners or losers, but just the fun of participating.  However, since it’s a really short game, and since multiple reviews are often helpful anyway, it can be played more than once with the goal being to beat the previous time.

The only materials that you will need are a set of question and answer cards – preferably one or two cards per student, but if  you have more or less cards in your set, you can make that work too.

To make your own card set, begin by writing one question about an important element in the story you have just read on the bottom half of a card.  (Save the top half of this first card for later.)  Write the question in this format: “Who has . . .?”

To set up  the game, pass out cards to every student.  If necessary, some students can share, or you can give two cards to some students.  Pass out all of the cards.

Play continues until the final answer is read by the student who began the game.  The object of the game can be to complete a round with no errors, or you can play to beat the time of a previous game.

Since every student must answer to complete the game successfully and since students never know when their question is coming up, it’s a good game for keeping everyone focused on the material at hand. 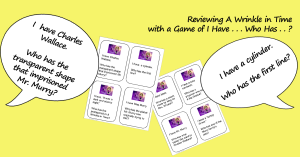 For each of the novels that I’ve done novel studies on so far, I’ve also written a set of “I Have . . . Who Has . . ?” cards.  I used to sell these card games separately in my store, but lately I’ve combined each one with  its novel study, so that when you buy the novel study, you get the game too.  You can see the titles that I’ve worked on so far in the Novel Study Section of my store.

The image below shows two of the cards for the middle grades novel, Pictures of Hollis Woods. 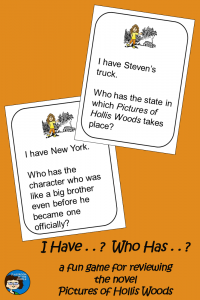 If you’re not already using this popular little classroom game, give it a try.  I think you will find it a very painless way to begin your review after reading one of the many great middle school or upper elementary novels. 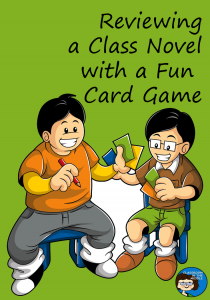