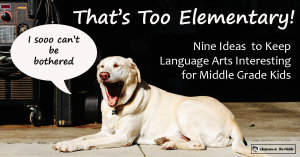 What do 4th graders, 5th graders, 6th graders, and 7th graders all have in common?  As soon as their teacher announces the day’s lesson, they love to respond “We’ve done that before!” or “That’s boring!” or even “That’s too elementary!”

In Language Arts in particular, we have to admit that there is SOME truth in that (at least the “We’ve done that before” part).  With skills that resurface year after year, it’s only natural that, at least to kids, the topics can appear repetitive.  And I’m sure that teachers in other subject areas see the same thing when reviewing skills learned previously before launching into their grade-level content.

So how do we get beyond the “I’m bored!” part and on to the “This is actually pretty  interesting” part with the least grumbling possible?  Here are some suggestions that I’ve gathered – some specific to reading activities, others more general.

Middle graders are mature enough to appreciate being told just what they will be learning and what they can hope to gain from the lesson.  When introducing a unit on a familiar theme, a brief introductory lesson reminding kids just what they have learned in lower grades and pointing out where they will be taking their skills this year can set the stage for working toward new goals.  For example, by the middle grades, kids have already studied story elements, probably more than once, so they need to know that, this year, they won’t just be learning to identify character traits, for example, but looking at ways the character traits fit in with changes that the the main character goes through as the plot of the story progresses.

One way to address the problem of kids assuming that a book will be boring is to follow the traditional wisdom that says kids read up, not down, meaning that, when given a choice, they choose books with characters older than themselves, not younger.  Always good advice. (But there can be exceptions!)

If the character’s aren’t older that some of your students, then it’s especially important to choose a  book with a theme that appeals to older kids.  As an example, the novel Wringer features a youngish character, but its theme of facing peer pressure to engage in aggressive behavior is anything but.  In fact, when I first read Wringer, I wondered whether it might be inappropriate for some middle grade kids, but as I continued to read, I became convinced that it was a good one!

I think older kids also appreciate reading books with a greater variety of themes too.  Some popular ones crop up so frequently, and there is such a variety of good choices out there now.

Stories and articles written for kids in the past tended to be told from an adult point of view, but stories told from the point of view of the main character are often more appealing to today’s students.  Informational articles and opinion pieces written by young people have a great appeal too.

By the middle grades, I think kids like to see a progression from where they began a topic to where it ends.  So following up readings with notebook activities, rather than one-day worksheets, can give them a record of where they are heading.  (And it also provides them with a handy study tool for end of book assessments.)

Of course, you will probably want to use some individual activities, too, and with these, the appearance can make a big difference.  Clip art that depict older kids, funny illustrations, and photos can all appeal to middle grade students.  And even the choice of colors can make a difference.  Illustrations created specifically for older kids often include darker colors or more blended colors, rather than the primary reds, yellows, and blues so prevalent on lower grade materials.

At this age, kids are better able to deal with side lessons too, and a long stretch on a not-particularly interesting topic can be broken up nicely with one lesson on a related, timely topic that the kids identify with.  For example interest in a novel study of story set during the Civil War might be revived with a current events lesson on a topic involving racial tension or pacifism, which are just as timely now as they were during the war between the states.

Middle schoolers and upper elementary kids love to work with a group, and a big project is the perfect vehicle for this enjoyable work.  Luckily, by this age, kids are somewhat more responsible (at least some of the time!).  They can handle the basics of organizing their own time and materials to work on a multi-day group assignment.  With help, or course!  Starting out by planning their timetable and deciding who will be responsible for what will get them off the a good start.  And of course, at this age, having the teacher’s help always available will hopefully defuse whatever complications arise that could potentially derail the big project.

Middle graders, like all kids, love to show what they know, and by this stage in their schooling, that can involve a little more than just presenting the results of their projects.  Some middle grade kids have serious expertise in outside topics.  Maybe a student in your class knows all about something related to the topic at hand that would make a great side lesson.  What a great opportunity to let one particular student shine!

If you haven’t heard,” That’s too elementary!” from your kids yet, you’re lucky.  But sooner or later, you know you will.  So be ready.  Be ready with lessons that will interest and challenge the middle grade thirst for something new.  And be ready to point out all of the things that they are able to handle now, things that their elementary teachers wouldn’t even have tried!   Your kids might not say it, but they’ll appreciate the effort.

These are just a few of the resources for teaching reading to middle school and upper elementary kids available in my store, Classroom in the Middle. 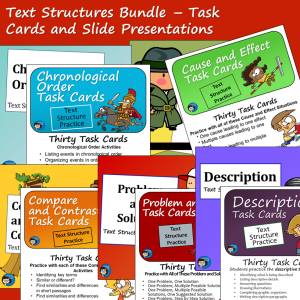 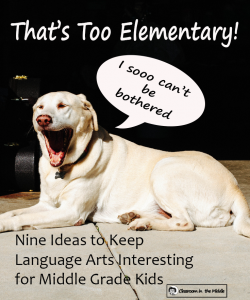