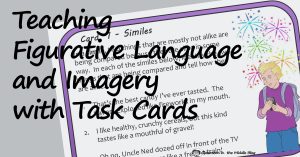 Figurative language and imagery are fun to teach, but they can be difficult at the same time!  Fun because these types of language appeal to the senses, which allows the language to become concrete for the kids.  Fun, also, because they appeal to kids creativity.  Difficult because they need to be looked at closely to be understood.  Even though kids have been hearing, and understanding, figurative language for most of their lives, they probably don’t have a lot of experience looking at it closely enough to recognize the imagery for what it is.

Similes are a good place to start, because a simile really spells it  out.  This thing is LIKE that thing.  The comparison is right there.  The difficulty of course is explaining HOW the two things are alike.  What quality of the first thing makes it similar in some way to the second thing (even though the two things probably don’t appear at all similar on first glance)?

So I usually start with having students simply find or identify similes and then work up from there. Next – how are the two things alike?  After that – complete a simile given the a starter.  “Dark clouds are rolling in like . . .”  “This corn on the cob tastes like . . .”  Students can also draw the image that they get from a simile, a good way to show the comparison.  As a next step, students could write their own similes, given specific topics, and finally they could try adding similes into their own writing.

The examples here are from my Figurative Language and Imagery Task cards. 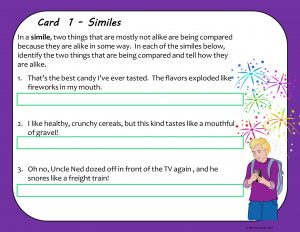 Teaching metaphors often follows the same format as teaching similes – at least at first.  But kids sometimes get bogged down with metaphors – because basically metaphors can just be more difficult.  While similes spell it out for the kids – with the word “like” or “as” right there, metaphors need to be discovered.  And to make it even more complicated, metaphors can go on for more than one sentence!

So, to put it in terms of teaching, kids just need more practice with metaphors.  Use task cards, or whatever.  Stop to note metaphors in daily reading.  Find metaphors in popular songs.  It can even help to make note of common (overused) ones in everyday speech.  Actually, I think the idea of using cliched metaphors can be a really good one, since it helps kids relate to the big idea.

One great way to get into personification is with a picture book that the students will remember from when they were little (littler?) kids – one of those with a character such as a talking dog or a talking carrot.  Kids will still need some practice recognizing this type of figurative language in other texts, but this concept, at least,  usually makes sense to kids easily.  Creating a picture book with personification, by the way, is a fun project!

Hyperbole is one of the easier ones, and some say that it technically isn’t figurative language.  But kids like hyperbole, and they get into coming up with more and more exaggerated ones, so if you ask me, anything that helps kids get interested in using creative language is worth exploring!

Imagery, including images of sight, sound, touch, taste, and smell, is usually less complicated to teach than figurative language.  Basically it’s just good description that appeals to the senses.  So this could even be a good time to change it up a little and start with writing rather than reading.  Give the students an  object – a piece of candy, a paper bag – anything really – and have them list descriptive details, using as many of the five senses as possible.  This list can become the prewriting for a descriptive paragraph.  Follow up by looking for ways that authors used sensory images in short passages or in stories that students are reading. 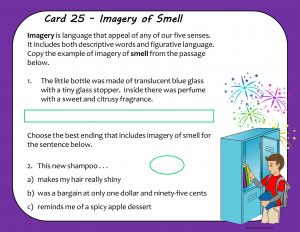 With figurative language and imagery, as with any teaching unit, we want our kids to eventually apply what they have learned.  So a progression of activities, from individual types of figurative language or imagery to passages that may have more than one type is an important step.  And even beyond that, continuing to note these creative bits of language in their daily reading and writing is maybe even more helpful.  That’s also when we really see the benefit of all the effort put into learning similes, and metaphors, and so on. 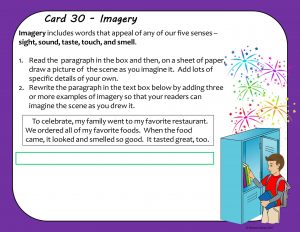 Basically, my favorite figurative language and imagery resources fall into two categories – stuff kids love (such as candy to describe or pop songs to search for examples of imagery) for introducing the concepts, and task cards for practice.  The task cards in my TPT store come in three versions  – printable PDFs, Google slides, and a TPT Easel activities.  Both digital choices, the Google slides and the Easel version,  come with a printable version. 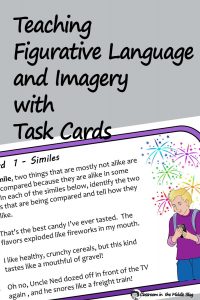