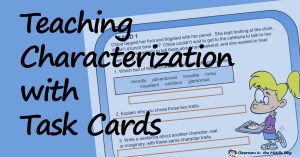 Characterization is such an important story element when you are teaching a fiction story or a narrative non-fiction piece such as a biography or memoir.  In reading lessons, kids are often asked to identify character traits and maybe to find text evidence to support those traits.

But have you noticed that kids tend to use the same few traits over and over again?  Sometimes a big list of character traits is a good tool to post in the classroom or for students to keep handy in their notebooks.  If you don’t already have a favorite list, a quick search will give up plenty of choices for a ready-to-use classroom list.

Once you’ve got a nice big list, it’s time to think about teaching – and for teaching characterization skills, task cards are my favorite resource – perfect for mini-lessons as needed or for a quick review for kids in the older grades who have “already learned that.”  One thing that I especially like about using task cards is that you can approach characterization from a variety of angles focusing on one particular skill at a time, a few particular traits, or maybe, to mix things up a little, even on writing rather than reading.

Character Traits with a Word Bank

Giving students a bank of choices makes it easy for them to think of traits that wouldn’t automatically come to mind.  On these cards, students follow up their choice of traits by explaining their choice and then by writing their own sentence about another person or character with the same traits. In this digital version, kids type their answers in the answer boxes provided. 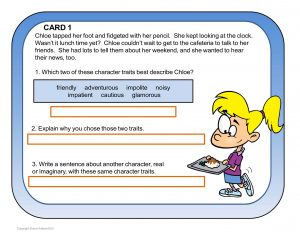 Determining Which Types of Words Can Be Character Traits 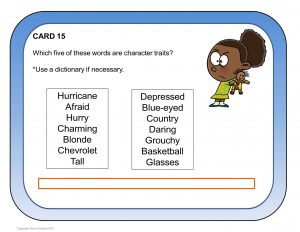 Expanding on Characterization with a Graphic Organizer

So what’s next after naming character traits.  There’s so much right in the text that kids can work with to expand their knowledge of characterization.  Check out this graphic organizer.  Students look at five different aspects of characterization including what the character says, how others react to that character, and three more areas that you can see on the card.

You can also click on any of these images to check out the whole task card set. 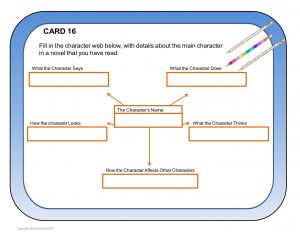 What else can you do with character traits using task cards?

If you’d like to take a look at my Characterization Task Cards, note that there is one choice using Google slides and another one using TPT’s Easel.  Both sets include the printable PDF version as well. 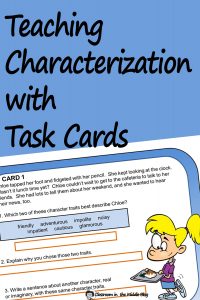