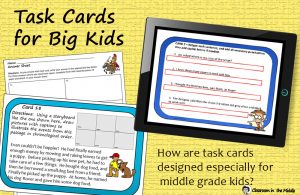 As a middle school teacher, I knew that it was important to incorporate movement into my lessons – to let out some of that boundless middle school energy.  But I could also see that movement could get distracting really fast, especially too much movement.

That’s why, whenever I create a new set of task cards, I always design them with middle schoolers in mind.  No little cards with one quick question per card here – those cards just causes too much rushing around and getting off task.

My task cards are large, just two cards per page in the printable version (one per slide in the digital) with plenty of content per card – maybe several questions, maybe a paragraph to read before answering, or maybe longer responses – just enough for kids to settle down and really get engaged before moving on to the next thing.

I also keep my middle school audience in mind when designing the appearance of the cards with colors that are bright but not primary and clip art that appeals to this age range.  Funny, cartoon-style clip art is a favorite as well as clip art of kids in this  same age range.  Those little round-headed drawings of kids are cute, but I think, not so appealing to  an upper elementary or middle school audience.

Take a look at these examples from a few of my task card sets.  The first two show print versions, and the third one shows a digital version.  If any of them look like something you could use in your classroom, click on the image to see the full preview. 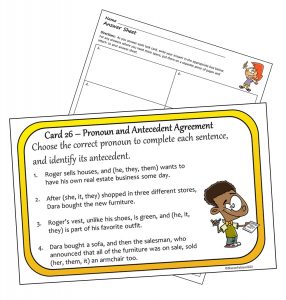 I’ve also done a grammar set on verbs, and one on subject-verb agreement, with more parts of speech in the works. 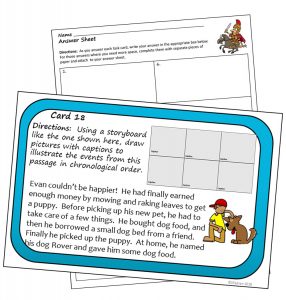 There is one set for each text structure including cause and effect, compare and contrast, problem and solution, description, and chronological order. 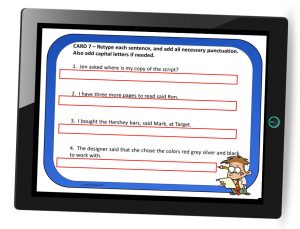 This proofreading card shows you a digital version.  All of my task card sets include both a print and a digital version – another feature that is useful for the middle grade  population.  In fact I now have two digital choices for each set – TPT Easel or Google slides.

Since the content is, or course, the most important element, I just wanted to ask one question – What do you think?  Too much content per card?  Not enough?  Let me know what would work for you.  I’m starting a new set of cards and would appreciate your input! 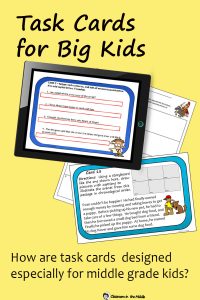