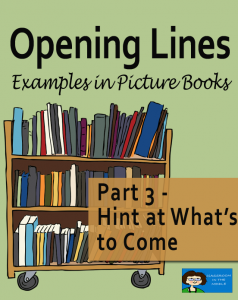 Here are some examples from a few favorite picture books:

• ” I can’t find Hannibal anywhere,”  (Opening line from Hurricane by David Wiesner)  Hannibal is a cat, and he has disappeared because a storm seems to be coming.  This bit of dialog from one of the main characters is just enough to tell us that storm-related trouble may be about to happen.

• “Often in the winter, when the wind drove with a roar over the prairies and came thundering up the creek, making the teepees shudder and strain, Little Wolf would listen to the wind and think it was the stampede of the buffaloes.”  (Opening line from Where the Buffaloes Begin by Olaf Baker)  This opening introduces the setting and names the main character, but it also hints at what Little Wolf is about to do – something to do with the sound of the stampeding buffaloes.

• ” It was just another regular day in possum trot.”  (Opening line from Saving Sweetness by Diane Stanley)  This opening is so simple that you just know this won’t be a “regular day” for long!

• “The news traveled swiftly through the tunnels of the ant world.”  (Opening line from Two Bad Ants by Chris Van Allsburg)  This  one tells us that something is going on, “the news.”  The twist is that the news is traveling through ant tunnels.

All of these openings give us just a hint- enough to know that something is about to happen, or has already happened, but they don’t give away the story.  A little suspense makes a good opening because it makes the reader want to keep reading!

Students can practice writing this type of opening by replacing parts of these published opening sentences with ideas of their own:

For a writing lesson about beginning sentences, try some of these with your students.  I think they will find it a fun lesson!

And if you have any other suggestions of favorite opening lines that you like to use as student samples, leave a comment.  I would love to hear them!

Here are the links to Part 1, Settings, and Part 2, Characterization: 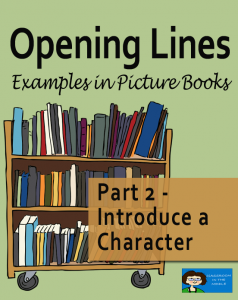 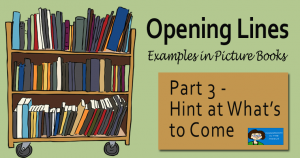