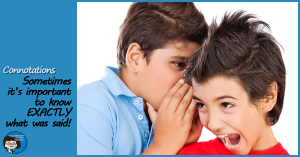 Connotations – it’s a tricky subject!  But luckily middle schoolers and upper elementary kids are good at understanding connotations in their own gossipy way!  Now they just need to apply that vocabulary skill to academic activities rather than just decoding the word nuances in a typical “he said . . . she said . . . ” gossip session.

Teaching connotations can be tricky because at younger ages, kids learned lots about synonyms – words that mean “the same thing.”  Now they need to really revise that knowledge and understand that synonyms actually have slightly different meanings.  After all, what would be the point of having so many word choices if they all meant exactly the same thing?

Earlier in their schooling, your kids probably learned to make use of a thesaurus to find synonyms.  Maybe they were revising a paragraph of their own and looking for more interesting words to replace some overused ones.  So now a thesaurus seems like a logical starting point for a lesson on connotations and denotations.

To start, have students look up a common word in a thesaurus.  List a number of the synonyms that they come up with on the board.  Use this group of words as a starting point for a discovery lesson about the slight differences (and sometimes not so slight) between synonyms.  Use each of the words in the same sentence, and help the class to discuss just what the sentence means with each of the different words.

After trying a few words, have the kids work on a similar exercise in small groups.  Give each group a thesaurus, a big sheet of paper, and one commonly used word to look up.  Have the group choose and list five synonyms for their word,  write a sentence using each of the synonyms, and tell what each sentence means, emphasizing the differences among the sentences.  After groups have had time to complete their charts, each group can share their conclusions with the class.

To close out this lesson, talk about the meaning of “connotation” versus “denotation.”  All of the words in each of their lists had the same denotation; basically, they all meant the same thing.  But each of the words had a different connotation; looking a little closer, the meanings were slightly different.  Some of those words would work better in certain sentences than others would.  Knowing about word connotations can help students get more out of what they read, and maybe even more importantly, it can help they say more when they write.

Moving on from the introductory lesson, there are lots of ways that you can go with teaching connotations.  The concept can be used and reinforced in both reading and writing lessons.  With practice, your kids will move from understanding the basic concept of connotation versus denotation, to making use of their knowledge as the read literature and write narratives and essays. 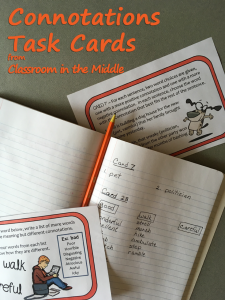 The activities on the cards include:

In addition to the new task cards, resources in my store about connotations include these Shades of Meaning Activity Sheets, an introductory PowerPoint presentation, and a set of Word Choices Activity Sheets.  Click on this image to see more details in a preview of the Shades of Meaning activity sheets or check out all of the vocabulary resources in my store,  including the two shown below. 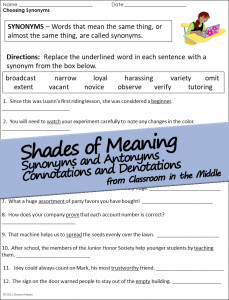 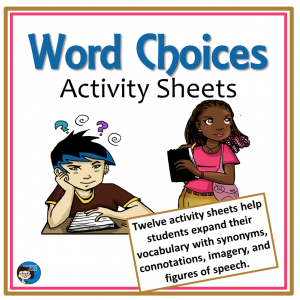 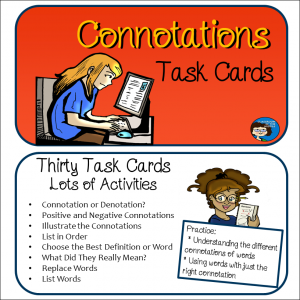 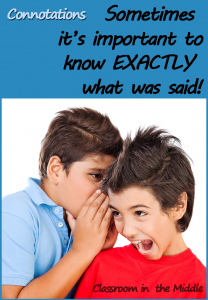