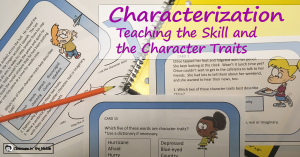 When reading a novel for myself, characterization is usually my favorite story element.  To me, that’s what a story is really all about – character development and how a character changes as the story progresses.  As a language arts teacher, I found that while it can be difficult for kids to come up with words to identify character traits, the whole idea of characterization is one that kids get into too!

While characterization is undoubtedly a complex skill for a writer to tackle, for kids characterization seems easier to teach in a way than just identifying character traits.  Kids are good at picking up clues that tell what a person is all about, and that seems especially true for kids as they hit the middle grades.

When I do teach identification of character traits, I like to give kids a big list of traits to work from or else provide word boxes with specific exercises.  In this way, the students can concentrate on identifying the trait accurately without, at the same time, trying to recall just the right word to describe it.

This is why I especially wanted to come up with a good variety of activities to teach this skill, sort of approaching it from multiple angles at the same time, and this is what I did in my Characterization Kids Task Cards.  Here are some of the activities that I used:

To practice identifying traits, I provide a short passage, just a paragraph, for the kids to read along with a bank of about eight words (too many for guessing, not to many to ask them to pick specific traits was my idea).  I also ask them for an explanation of why they chose the trait(s) that they did, and then add a follow-up question, maybe asking students to write a sentence about someone else with similar traits.

For a different option, but the same idea, I also include some multiple choice questions, again asking the kids to identify clues from the passage as well as the character traits.

On these cards, I provide a picture of a silly character, and then ask the kids to give the character a name and list any two traits that they like for the character. Finally, they need to write a one-paragraph “story” about the character that illustrates the traits they chose.

I always give the kids a choice of famous people, current of historical, and sometimes famous imaginary characters as well, since some of the people or characters might not be familiar to every kid, or at least not familiar enough to write about their character traits.

Time for the good ole’ Venn Diagram.  To begin, kids pick two people or characters of their choice that have something in common.  As they complete their diagram, they will define what the two have in common and then think of traits that differentiate them as well.

Complete a Web for a Novel Character

This is a basic character identification web that includes things the character says, things he or she does, how others react to the character, and so on.  Students complete the web for a main character in a novel they have read recently in class.  Since this one asks for more details that some of the other activities, a novel character works better that many short story characters.

This is a fun one!  Given two character traits, students draw the character as they imagine he or she would look and then tell how their drawing illustrates those traits.

For students who have the basic idea down, I included two cards about static and dynamic characters.

There are a few other activities as well in this set of thirty cards which has been the most popular item on my TPT store for some time now.  Most recently, I’ve updated the set with new clip art for a fun new look.  Check it out here: 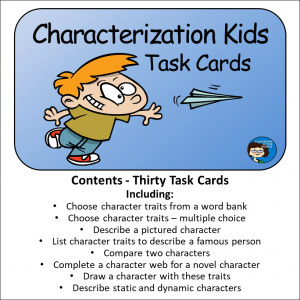 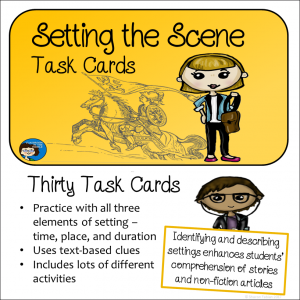 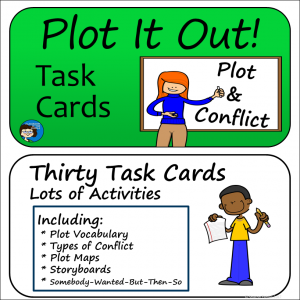 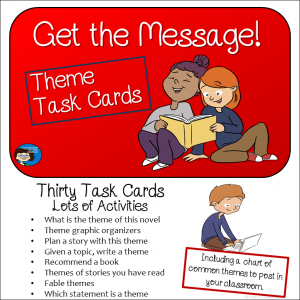 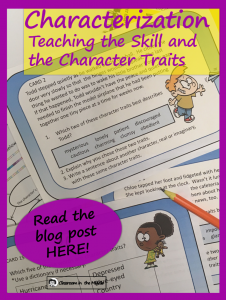