Fairy Tale Comics, edited by Chris Duffy, is a book that middle grade kids will love for its comic book style.  There is even one story done by the designer of the SpongeBob SquarePants movie characters!  Middle grade teachers will love this book too, because the stories in Fairy Tale Comics are perfect for demonstrating story elements in a format that kids will relate to.

The choices include classic Grimm’s fairy tales as well as tales from other traditions. Each one was adapted by a renowned cartoonist, and the stories included in Fairy Tale Comics showcase a variety of comic styles.  The stories themselves are retold in a modern style with some new plot twists, but they are not rewritten stories in the way that the well-known The True Story of the Three Little Pigs is.  Many of the stories in this collection retain the basic, original plot. 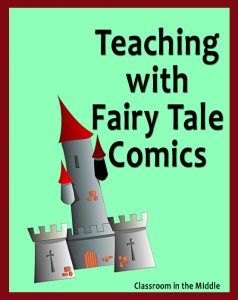 Fairy tales generally have a clear plot as well as other easily recognizable plot elements.  This is what makes them perfect for introducing the basic elements of fiction – characters, setting, plot, and theme.

Fairy tales are especially great for plot, and fairy tale comics are no exception; fairy tales are a great choice for starting off the study of plot with a plot map.  Kids will be able to easily pick out the rising action, climax, and falling action as soon as they know what they are looking for.

Characterization should be fun to do, too, with all of those bigger than life characters and the detailed  illustrations that give all the clues you could want to character traits!

What else – problem and solution, cause and effect, compare and contrast, even though the stories are all told with a sequential text structure, you can find plenty of these other elements mixed in.  And all along the way there are those great illustrations, keeping the kids interested and giving them clues, too!

Since the original stories have been around for ages, you can find the texts on public domain sites.  I found “Hansel and Gretel” on the Project Gutenberg site.  Very useful for a lesson on comparing two texts.  Kids can look for differences in plot, changes in settings, and how the characters might be presented differently now from the way they were back them.  Or they could look at the words and pictures; how has the way the authors tell their stories changed over time?

In case you are looking for some good, basic teaching materials to use as you teach story elements, check out this Story Elements Package in my Teachers Pay Teachers store.  It includes printables on all the basic story elements to use with any story along with a PowerPoint presentation to introduce or review the whole topic of story elements. 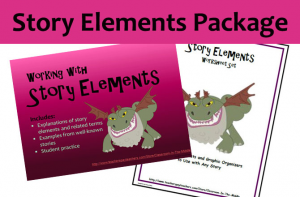 Linked with Reading Toward the Stars with the Literary Maven: 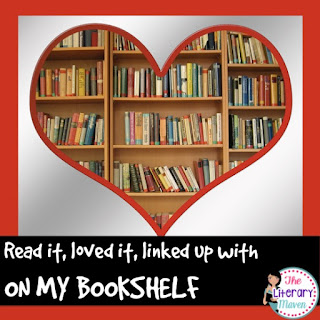