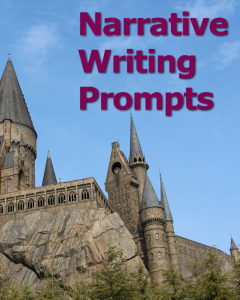 I’ve collected all the miscellaneous narrative prompts that I’ve posted here and combined them all into this one post, hopefully to make them more useful.  There are both fiction and non-fiction narrative prompts here.  Hope you find some of these free prompts useful for your classes!

Message  in a Bottle?

There were three things inside the plastic ketchup bottle that Aaron found in the woods behind his house – a piece of yellowing paper, a small, rusty key, and a cats-eye marble.  Aaron wondered how long they had been there, who had put them there, and – most importantly – why?  Was it just some bits and pieces that a little kid had been playing with last summer, or were the three items packed into the Coke bottle and hidden there next to the rotting log for a reason?  Aaron decided to find out.  He wiped the mud off of the bottle cap, twisted it loose, and pulled out the rolled-up paper.  Carefully, he unrolled it. . .

Think of a historical event that you have learned about in school such as the Civil War or the Industrial Revolution.  Then, imagine that you were living back in that time period.  Write a story about what it was like living through that historical event.  Make up the story, but include details that might fit with the time period that you chose.

While on vacation you are walking down the sidewalk, when suddenly you spot a small change purse nearly hidden under a shrub along the sidewalk.  You pick it up, open it, and are shocked to see that it contains not just coins, but several twenty dollar bills!  You start to count – twenty, forty, sixty, eighty, one hundred!  What do you do?

Choose a favorite teen character from a novel that you have read.  For example, you might choose Crash Coogan from Jerry Spinelli’s novel, CRASH, or Annemarie from Lois Lowry’s  Number the Stars. Think about what that character’s life might have been like several years after the end of the book.  Then, write a story about an event in their life at that time, maybe when the character is five or ten years older than they were at the end of the novel.  Be sure to write about just one interesting (fictional) event in the character’s life. Arrange your story in chronological order.

My First Memories of School

Write about one of your first memories of school.  Be specific and write about one particular time or one incident.  Tell what happened in chronological order with plenty of details to make the story interesting for your readers.

Write about one incident with a brother or sister that stands out in your mind.  If you do not have brothers or sisters, write about an incident with another relative such as a cousin or uncle.  Be sure to stick to just one incident, something that happened at one specific time and that you can remember well.  Tell the events of your story in chronological order.

I’ll be following up soon with prompts for opinion/argument and explanatory/informative writing as well as a set of picture prompts! 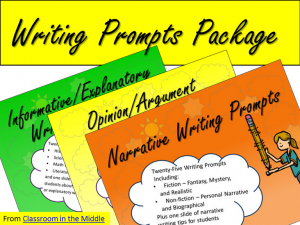